Booting A Kindle DX Graphite without a Battery.

I have an old Kindle DX Graphite lying around. The Lithium Polymer battery on it was well below charge and the safety on it was refusing to allow a recharge via the Kindle's USB port.

I opened up the Kindle, set my bench-top power supply up to 3.7 V and connected it to the battery headers, that I had soldered some jumper wire to. The Kindle refused to boot!

I wasn't prepared to buy a new battery for this unit, I just wanted to  play around with it and get some files off it.

I decided to jump start the battery with my PSU, but I also wanted to break Amazon's restrictions and get the Kindle to boot without the battery.

I did some Googling but found very little. So here is what I learned along the way:

Using my oscilloscope I was able to capture a byte when turning on the Kindle. Further investigation revealed that the Kindle is talking SMBus with the battery. SMBus is derived from I2C and is very similar. Below is an example capture from my scope:

The two inside terminals on the Kindle's battery are marked D and C. These are Data and Clock. 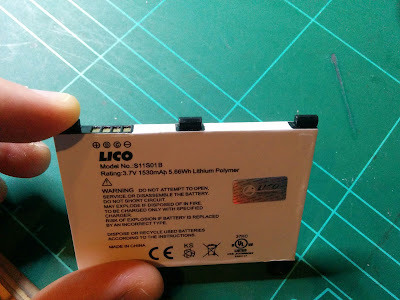 Connecting Dangerous Prototype's Bus Pirate. I was able to sniff the bus using the I2C sniffer.

As you can see above, this is the Bus Pirate in I2C mode. The discovered address space is the read and write addresses (0x98 and 0x99) of the Kindle.
I2C uses 7 bits for device addressing, the LSB 8th bit determines if an address is write 0 or read 1. Hence the two addresses for one device.

I charged the battery under constant supervision using my bench top PSU. (NOTE: This can be dangerous, please don't do this unless you know what you are doing as there is a fire risk!)

Above is the Bus Pirate connected in close-up. The Green clip is the lead to the internal pull up resistors on the Bus Pirate and is connected to the 3.3V rail (red). This is required as I2C uses an open drain so the data and clock lines need to be pulled up.

With the battery now charged and the kindle powered up the following data was captured by the Bus Pirate between the battery and the Kindle:

The first two lines are 'are you there' calls to the battery from the Kindle [0xAA+] the '+' is the ACK sent back by the battery. So things are looking good!

The line reading [0xAA+0x09+[0xAB+0x0E-] is an important one!
This is the Kindle getting the battery to report its voltage.

The I2C/SMBus protocol, to read a byte, is as follows:

This is how the Bus Pirate represents the I2C protocol:

So what is with 0x0E?  That's just the number 14 in hexadecimal.
The voltage should read somewhere between 3.7V and 4.2V!
So what is going on?

Reading the documentation on SMBus shows that this 0x09 command is comprised of two bytes. As a dead LIPO battery is below 3V the Kindle only cares about the first byte. If you add a second byte, eg. 0x00 to the first byte you get 0x0900 which in decimal is 3580mV which equates to 3.58 V. (yep battery isn't fully charged anymore at this point)

OK so now we have most of the data we need. How do we trick the Kindle?

Several Microchip PICs in the Enhanced Mid Range can talk I2C/SMBus without having to bit bash. This uses the MSSP (Master Synchronous Serial Port) which can also do SPI.

These PIC's also lend themselves quite nicely to programming with C rather than assembler for the base range. I chose a PIC16F1824 which was only around $2 from RS. Much cheaper than a new LIPO battery! This PIC also has a serial UART which can help for debugging.

For low level simple I/O you can't beat assembly on a PIC to know what is going on. But seeing as you are going to have to write up the I2C protocol in your code and debug it, C is going to be the easier option!

So, without wanting to write from scratch; I poured over several examples of PIC I2C code in C.The examples made no sense and didn't appear to behave as per the SMBus protocol. I still don't quite understand what those code examples are trying to do. Looks like sequentially reading and writing to EEPROM rather than reading and writing to specific addresses on a device. I read Microchip's AN734 and AN736 PDF's and downloaded Microchip example code but they were the same. They don't seem to follow the I2C protocol, and didn't work for me at all.

So I grabbed the best parts of the example code and rewrote it until it did the right job:

Also using a Raspberry Pi with i2cdump installed I was able to read the battery's entire 128 bytes of data:

I pasted the entire data dump into an array in the source code. This should now fool the Kindle into believing the battery is really there, and the PIC will reply with the same data for any request that the battery would have.

Below is that complete code:

It helps to have PICKIT 3 or similar to do in circuit debugging, as it can get quite difficult to see what's happening on the PIC otherwise, I tried to get all this going with a PICKIT 2 but was flying blind.

I included some messages written out to UART to let me know the value of SSP1STAT and the SSP1BUF registers but the PICKIT 3 really helped me the most.
Note you'll need a logic inverter to interface the UART with RS232 to your PC.

It works the Kindle boots without a battery!: 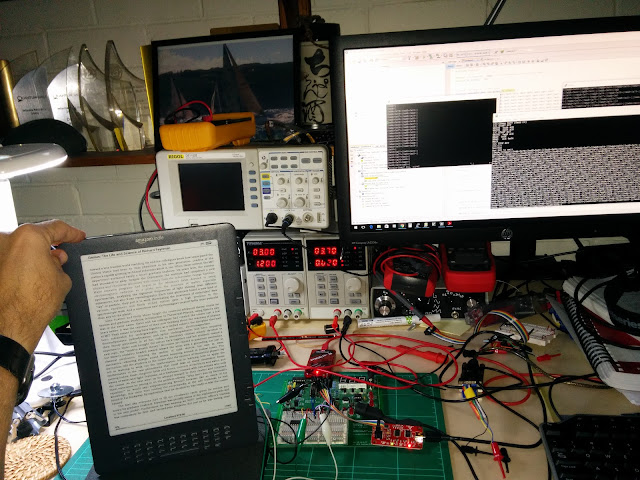 Next step is to wire the up the USB to power the Kindle rather than attaching a PSU to the battery headers.

Then it's time to delve into some OS hacking on the Kindle and see if I can get an old laptop Wifi card to replace the 3G card inside.

I do my PIC development on the Gooligum Dev board (shown below).
Great place to learn about programming PICs
http://www.gooligum.com.au/ 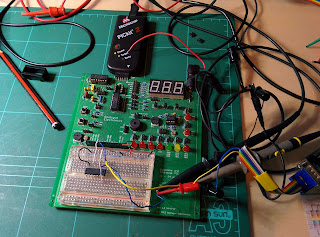 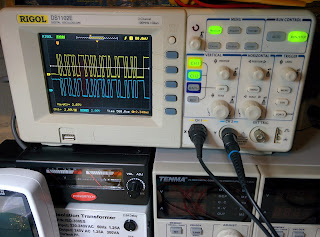